The short film “Prototype” intrigued us to get in touch with the author, who further fascinated us with his introspective take on life, film, and social issues. Read his responses to our Q&A with TALENTS.

TALENTS (TM): Tell us about the vision behind the short film Prototype. Where did you get the idea and draw influence?

Chris Ortega (CO): Prototype is an Afrofuturistic sci-fi film about a young woman seeking to win her mother’s approval by successfully programming an android with human-like empathy and emotional recognition. Stories about Androids have always resonated with me because of the issues around identity that I faced growing up with a multiethnic background in the rural south. I remember being asked often “What are you?” by both my white and black peers to which sometimes I would answer “I’m a human being”. But what kind of human being I wasn’t as sure. I am Jamaican-American who didn’t grow up around other Jamaican children, and I am an Afrolatino who wasn’t able to speak Spanish with other Latinos. The feeling of being partially connected to different cultures but not fully one is the feeling I related to an Android who is human in appearance but not accepted as one in essence.

In 2016 the amount of attention news broadcasters gave to police shootings of black men and women seemed to have reached its peak. For the first time in history, the phenomena that have plagued African-American citizens since their arrival in this country was now bombarding citizens in high volume live on their social media timelines. With the advent of the #BlackLivesMatter movement, I noticed the silence of many of my white counterparts which made me aware of what I felt was a gap in empathy for black pain and life. Can empathy be learned and what experiences could make a dominant group empathize with marginalized people if they will never have to walk in their shoes? I decided to write a story about a character in an allegorical, Afrofuturistic world who is on a journey that tests her own ability to empathize.

TM: Which of the characters really stands out to you and why?

CO: The story’s protagonist, Sol. Sol is trapped in a remote laboratory facility with her mother until she proves she has successfully programmed an android to distinguish between authentic and inauthentic human emotions. I relate Sol’s feeling of longing to be elsewhere to my experiences of feeling trapped in my own rural town, and under- stimulated by my environment. She longs greatly to win the approval of her mother who is adamant about having her follow in her legacy by becoming a great scientist. But what makes Sol compelling is that though she faces her own dilemma she cannot see past her problems to hear the pleas from the suffering Androids she is testing. Her self-interest comes at the expense of those subject to her power.

TM: In your own words, please provide a summary of Prototype.

CO: Prototype is an Afrofuturist, sci-fi film about a mother and daughter living in isolation on a remote science compound, who work to quickly patent the most human-like artificial intelligence on Earth. As android after android fails, Sol, who conducts empathy tests on her mother’s android creations, is pressured by her mother, Annette, to deliver a passing test or continue to be confined to the limits of the property. But when Sol comes against an unruly android, 500, she loses control and the real test begins.

TM: Please share a little background on yourself. What are your other interests/hobbies? Where are you originally from?

CO: I was born in Queens, New York, and I have a loyal affinity for everything New York even though I moved to Florida when I was a child. I am a recent alumnus of Morehouse College and the University of Southern California. My mother is a registered nurse, and a good one! My father passed away, but he was a printer and book-binder who, along with my uncle, grew up on movies. The superhero of their day was Tarzan who influenced my father’s love for swimming. My father’s love of movies and music was inherited by all of his children.

TM: How did you discover your love for film?

CO: I used to watch black and white classics like Bud Abbott and Lou Costello with my father. When I was six years old growing up in Laurelton, NY, I was gifted a model train for Christmas. I was fascinated with airplanes and trains, and I originally wanted to be an inventor when I grew up. Until one day, I saw the behind the scenes footage for a 90s action film where they were blowing up a model train built to scale, to make it look like a real train blowing up in the movie. I was also a Godzilla fan, and I had learned that the buildings and cars that Godzilla would destroy were really miniatures, or in essence “toys”. Suddenly, I realized the fantasies I had playing with my toys could be made real through the movies. 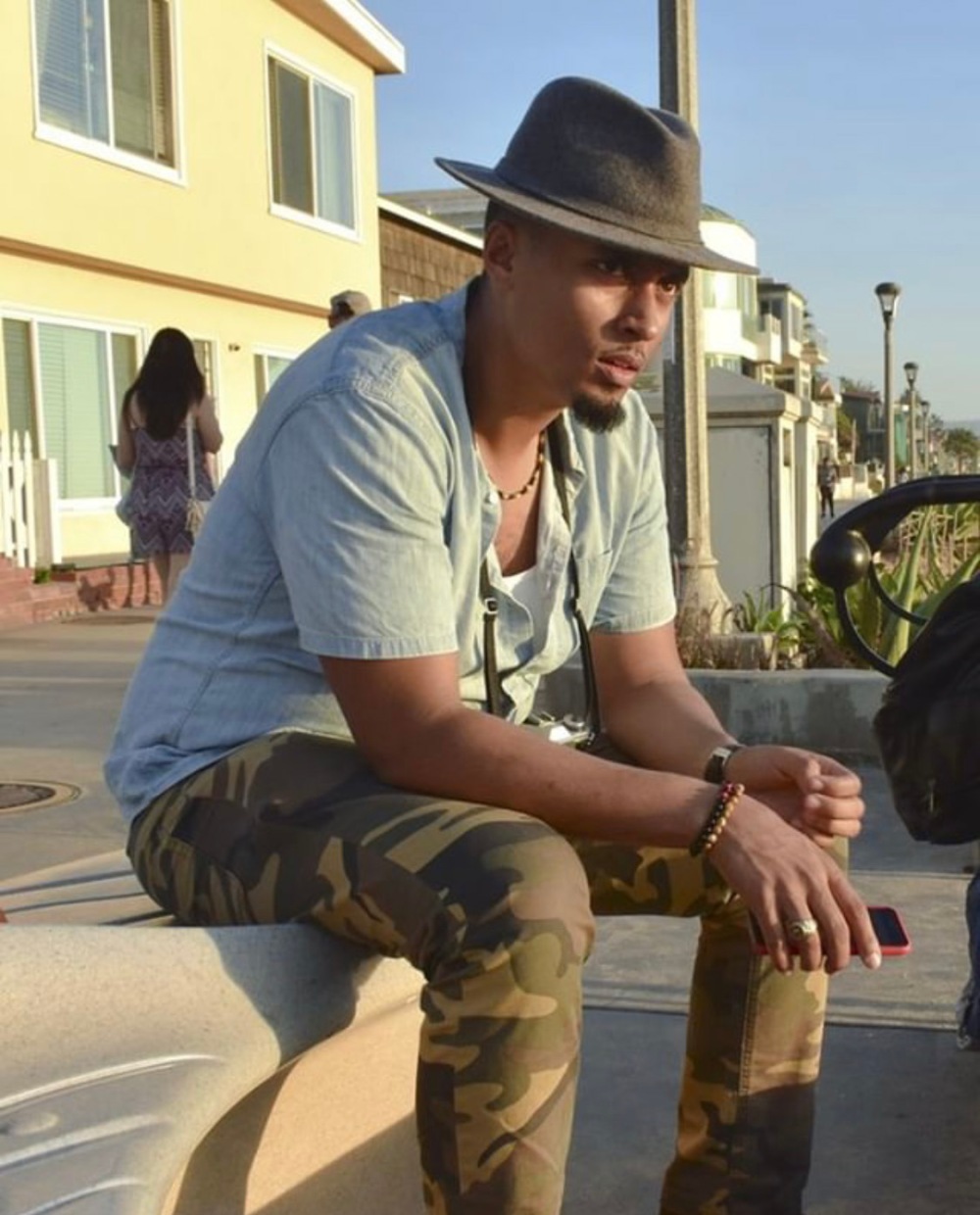 I think my lifelong curiosity for science paired with my love for storytelling made me very interested in exploring science fiction as an adult. To this day that appreciation for “camera tricks” and “movie magic” has made me adamant about using practical effects over today’s heavily computer-generated images. I am passionate about restoring the feeling of wonder and mystery back to the craft of cinema. I enjoy when people ask “How did you do that?” after seeing my films. Great filmmakers are magicians and illusionists just as much as they are storytellers. The moving image is nothing but a powerful illusion.

TM: What are some of your favorite movies/actors/TV series?

CO: When you become a professional filmmaker I find that this question becomes harder to answer. Every film you watch becomes an opportunity to add something new to your tool belt. These days the TV shows that I have been studying vary from Atlanta, and Dear White People to Black Mirror and Stranger Things. For me, the TV show that has influenced me the most has been The Twilight Zone. I am eagerly awaiting Jordan Peele’s series reboot. Some of my most influential movies of all time include The Matrix, Get Out, 2001: A Space Odyssey, Psycho, and so many more. Most of my favorite actors include the ones I used to watch with my father, like Humphrey Bogart, Claude Raines, and Ingrid Bergman, and I revere actors who come from stage to screen, like Sydney Portier, Cicely Tyson, and Phylicia Rashaad. It may or may not be true, but my father used to tell me the best actors and directors come from theater, and that notion still sticks with me to this day.

TM: How do you prepare (mentally, spiritually, physically, etc) for the process of filming?

CO: The most important tool for preparing to undergo production is prayer. During the production of Prototype, I prayed every morning before the crew arrived to set. I was also fasting from meat, and I made sure to get proper exercise leading up to the production. Filmmaking requires every bit of my mind, body, and soul to be in total focus and alignment. What most people don’t understand is that creativity is spiritual energy. I take that very seriously and I want to know that everything I am doing is in alignment with my spiritual purpose. I take tremendous responsibility for the spiritual energy that my actors are embodying, and my audience is making themselves available to receive through their eyes. Thoughts are incredibly powerful, especially the ones a person holds unknowingly, and what is film but a powerful transmission of thoughts being made to feel and look real? Art does imitate life, but we know from history that life has often imitated both the negative and positive things we first experienced in art.

TM: What has going to school for film taught you? What are the key takeaways?

CO: Though I learned a lot about filmmaking in film school, I learned even more about the human element of filmmaking. Collaborating with people from all walks of life, with different predispositions and personalities can be extremely challenging. But the right group of people on a production makes the process of filmmaking incredibly worthwhile. Film school taught me that most of my job as a director is to hire the right people, which start first with my own self-awareness. Who am I? What are my strengths and weaknesses? How can I surround myself with people who mitigate my own weaknesses and who I too can elevate? The understanding of this dynamic is the bedrock from which a project can exceed the abilities of all its individual members and become something transcendent.

TM: What do you hope to accomplish through storytelling through film?

CO: People imitate what they can see. I hope that through my use of speculative fiction that I am able to inspire marginalized communities to see beyond their circumstances with a sense of hope and to envision their own identities with a sense of agency.

TM: Any more upcoming film festivals where Prototype will be shown?

CO: The Inaugural year for the Tide Film Festival in Brooklyn New York, (9-11 November 2018) and more festivals on their way!

TM: Please list all awards/recognition Prototype has received so far.

To view and learn more about Chris and the amazing concept of Prototype, use his social media contact information below. Hopefully, you can catch Prototype at a future festival!

Be sure to join our network and keep in touch by liking & following us on social media!

© 2016 All Rights Reserved by the Author(s) of the Content and TALENTS Magazine. Copying or reproducing any part of Content is prohibited without first obtaining the right permissions.