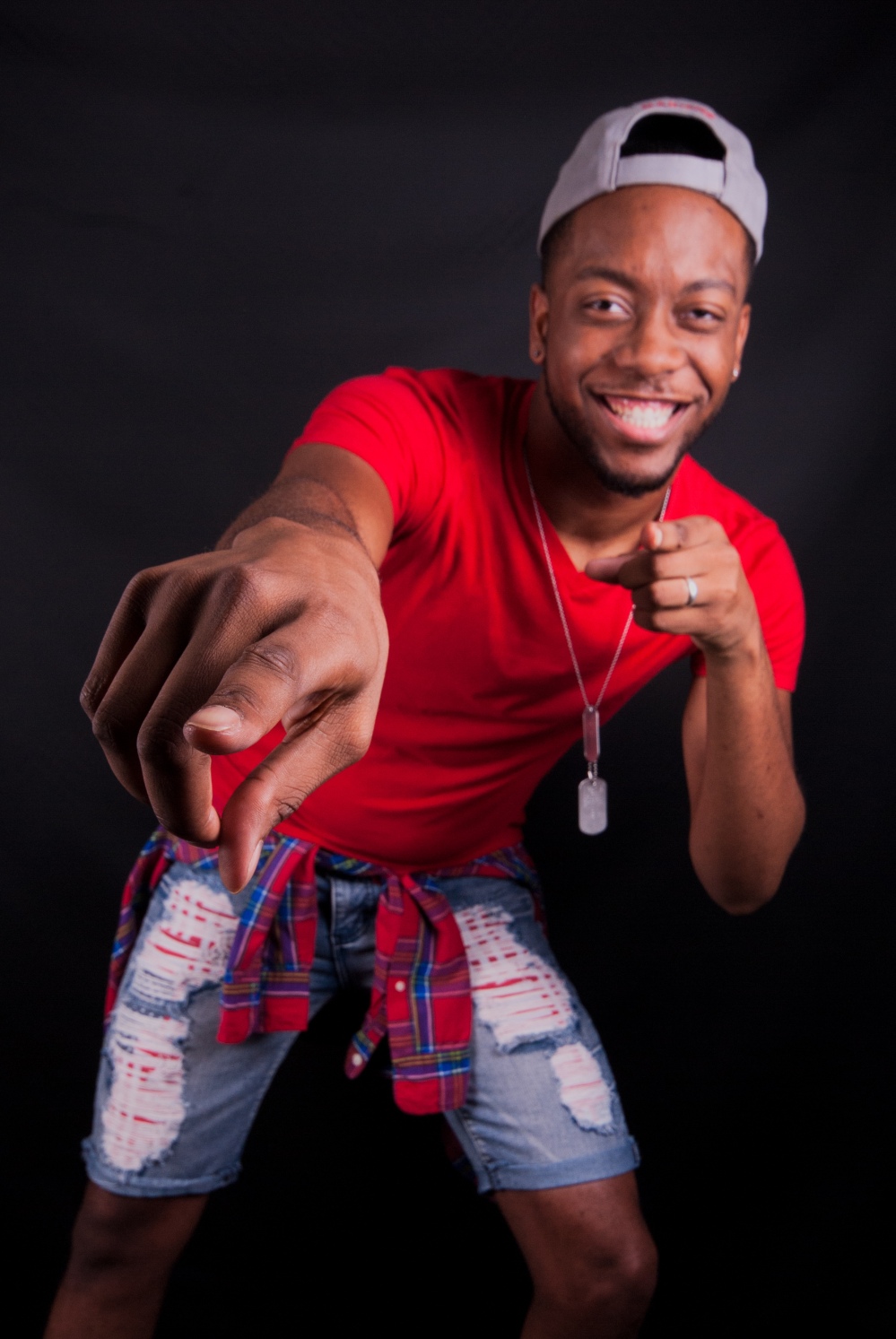 Take 3! It is scorching outside and just being out is enough to drain my energy, so when I arrive at the beautiful home of Sherco Bakari I am relieved. UA Magazine sat down with the 24-year-old producer, who’s been running every aspect of his production company, Foreman Empire Productions, start to finish since day one. Talk about dedication and hard work! Bakari embodies the commitment every dream chaser should have to themselves and their vision. We sat down to learn more about his latest, third installment and we’re eager to share about where this young man is going because there is no doubt a secured, bright future ahead when you combine talent with this level of drive!

Casting began in March 2016 for Foreman Empire Productions Visitant: Dark Hours, a spin-off from Bakari’s second film, and since then the young producer has learned a bit more about production, namely staying true to set standards. Having single-handily overseen the production of past projects, Bakari provided a lot of insight into what it is like to step out on faith when it comes to pursuing your dreams and working your way up with what you have, even if it means starting with nothing.

The first lesson, let’s talk about casting. “I made a mistake last time during my last production in casting just anyone who wanted to do it . . . . So, this time, I said to myself, I’m not going to just cast anyone. I want to cast people that actually look the part . . . . I want people that are smart, quick that can think on their feet; that can get the job done in a timely manner.”

The extensive cast hails from various states along the east coast and involves an extensive network of both models and actors. From recent postings about the incoming cast for this upcoming film, Bakari already has a running list of talent to play the roles, guaranteeing the fruition of his vision for this next film. It’s not just about finding actors who are talented or who look good; it’s about finding the right combination of both. And there’s more! Throughout our interview, Bakari stressed one of two things: the importance of investing in yourself before expecting others to invest in you, a point that hit home and resonated with us both.

Bakari, who will tell everyone plainly, upfront that there is no compensation, stresses that he’s only interested in working with individuals who are trying to make an investment in themselves. It’s not about the money when you’re in pursuit of your craft, but about the time you invest in growing it. “I’m rising just like everyone else is,” Bakari states. “And with this company, my main goal is to help people like myself get exposure. We’re all working together . . . I’m looking for people that aren’t all about cash, but they’re all about their craft. If you can work your craft and you’re passionate about what you do . . . The fame and the fortune is going to come, later on, it’s going to come with that.” His words put into perspective the mind frame of someone who is serious about pursuing any goal that involves creative expression.

“I was little . . . I got into horror with my grandparents. That’s all they watched . . . . I was scared; I was terrified, but as I grew older I’m like, I’m terrified, but yet I still want to watch this. That’s just like your mom says the stove is hot, and you want to go keep touching it . . . It’s that type of thrill; that rush that I get. I love being scared.” Bakari’s love for film and horror then has helped propel his drive for acting and screenwriting today. He’s proud of what he’s accomplished, especially given the fact that he’s been making it all happen with little or no budget. “If you want to do something in life, you’re going to make it happen. I moved all the way from Georgia in January (2016) because I . . . had two big modeling opportunities and I took it . . . No money, no car, no nothing. And I’ve been elevating ever since. It’s been getting bigger and bigger.” Can you say inspiration? There are so many words that can be used to describe taking such a giant leap of faith into the unknown and I enjoyed listening to every detail.

“I’ve never written a script before. I studied for months,” Bakari says when it came to starting this current project. He’s just completed writing his first, nearly 90-page script. While he is very pleased with his first two independent horror films, he wanted to improve this production and he is grateful that everything has been running smoothly for the film. However, often pursuing the dream comes at a steep price, along with a few bumps in the road from those closest to home. “You have people, left and right, family, friends in your ear . . . I have to focus,” he says. Rest assured that it’s all in love, but when it comes down to business, it’s very clear that he is driven and will not allow anything to get in the way of production. He is focused on his craft. He is focused on business, and it’s not something he believes anyone should ever take personal.

On the heels of constantly balancing his relationship with family and friends, Bakari also discussed experiencing a crushing breakup with his partner, earlier this year. It was enough for him to consider quitting every one of his aspirations. “I thought I had someone who was going to be my rock when it came to my career . . . . When the answers started to come . . . I can’t describe to you, but I stopped everything.” Finding his way back to his craft by finishing his most recent script has helped the young producer get through this hardship. Now he says, “That was a big accomplishment for me, and I told myself, I’m never going to allow anyone, I don’t care how much I love them to push me away from my love, which is acting. Acting, acting, acting.” He shares that acting is his life and that he, along with his faith in God, is what will make it happen.

“You need to be celebrating with me now like this is legit like this is 100%,” he says. “That’s what I need.” For Bakari, it’s about supporting an individual through the journey, not just after they’ve arrived.

Bakari’s second independent film, Visitant, filmed in February depicts the tale of two friends who start to experience a series of unsettling events after uncovering a mysterious dark box. The sequel continues the tale once a package arrives outside the cabin door of a young girl and her friends celebrating her 21st birthday in the woods. Bakari assures us this film will be taking it to a new level stating, “This time things are more violent, things are more gruesome, things are more intense, and . . . It’s darker.” Hence, Dark Hours.

On that note, I asked Bakari to shed more light on his interests in the paranormal realm and his answer points back to his love of his craft. “I’m looking for people that . . . have no limit . . . I want you to sound crazy, I want you to look crazy, I want you to do things that are weird and abnormal because that is what makes horror so enjoyable . . . When those actors and actresses are playing possessed humans, that is them acting. Everything else is just special effects.” So if it doesn’t feel wrong, you’re not doing it right.

The name for Foreman Empire Production derived from a hashtag he used while promoting himself on Instagram only this past year (2015). Today, Bakari pushes his team and isn’t afraid to test their limits. “I push my actors and my production team members to their breaking point to see how well they work under pressure, because if you can’t work under pressure with me and you can’t be focused, and everything I say, you take to heart . . . how are you going to make it out in Hollywood?”

You can hear the entire interview via our magazine’s website at UAMAGAZINE910.COM and be sure to keep with Bakari (who is also a rising professional runway and print model), cast and crew via Facebook by searching Foreman Empire Productions and Instagram via @theofficial_shrecobakari. You can visit filmfreeway.com/project/trepidationmovie and filmfreeway.com/project/visitant to view Bakari’s first two films, Trepidation and Visitant. Be sure to join our network and keep in touch by liking & following us on social media!

© 2016 All Rights Reserved by the Author(s) of the Content and TALENTS Magazine. Copying or reproducing any part of Content is prohibited without first obtaining the right permissions.